These are scans of proof sheets of 4x5 glass plate negatives taken by my grandfather in 1901 while a student at Bates College. They include a number of photographs of the family and the land around his home in Waterford, Maine, and others showing various Bates scenes and students. A number of the Bates pictures appeared in the 1903 yearbook.

After about 1890, photographic technology improved so that it became much easier for amateurs to take, develop and print their own photographs. There were, of course, the innovations in sheet and roll films, beginning with the Kodak Brownie. But the development of good automatic lenses and faster emulsions also made it possible for ordinary hobbyists to make photographs without the problems of wet plates and slow films exposed by removing the lense cap.

The images here show a Manhattan Optical Wizard B camera, manufactured by Gundlach Optical Company, originally in New York, later in Rochester, probably around 1900. This is not the camera that made the images here, but it is likely very similar to the camera that was used. The lense is a Bausch and Lomb, with shutter speeds to 1/100 of a second and f stops from 4 to 128. It must be cocked manually; the shutter release is attached to the cocking mechanism, and two small shock-absorber-like cylinders are used to smooth the release process.

The camera is integral with the folding case; wood parts are mahogony, other parts brass. Note that the camera can be used either as a view camera, by opening the rear door and using the ground glass, or as something like a shapshot camera, by using the viewfinder next to the lense. The viewfinder pivots to allow both horizontal and vertical compositions. Like today's medium-format view cameras, the Wizard B has adjustments to raise and lower the lense, and to change the angle of the plate holder, in order to correct for optical distortions in perspective.

4 inch by 5 inch emulsion-coated glass plates, purchased by the box, fit into the wooden plate holder, two per holder. The plate holder is inserted into the camera from the side, between the ground glass and the bellows. Once inserted, the dark slide is removed from the plate that faces the lense, and the exposure made. The dark slide is replaced, and the holder can be reversed to expose the other plate. Note from the image of the plate package below that the plates used by Burton were made in locally, in Lewiston, Maine.

The original prints made from these negatives are all contact prints; one of the advantages of the 4X5 format is that contact prints are large enough to view well, without the need for an enlarger. The prints would have been made by placing the negative in a contact printing frame with a sheet of photographic paper behind it, and exposing it to light. Obviously sunlight could be used for making prints, eliminating the need for artificial lighting. Burton Sanderson's diary entries that mention working on photographs seem to indicate that there were facilities at Bates at that time, though there is currently no further information about what the darkroom may have been like. In addition to normal prints on photographic paper, Burton also made a few cyanotype prints on cloth, which his sister Josephine used to decorate a pillow. Cyanotype prints are blue in color, and are made by soaking cloth or coating objects with the photo emulsion, then exposing and developing the sensitized material. 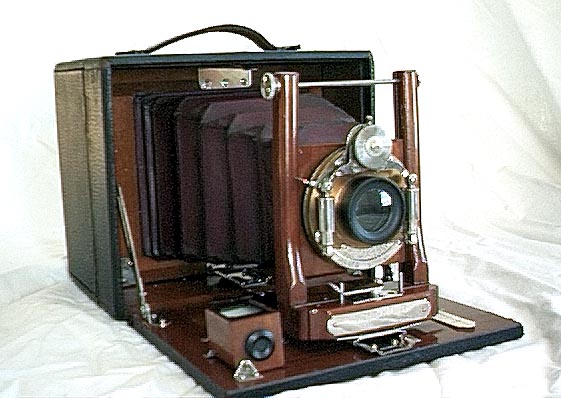 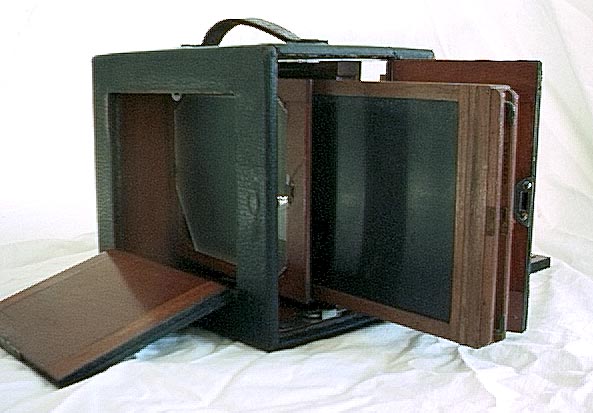 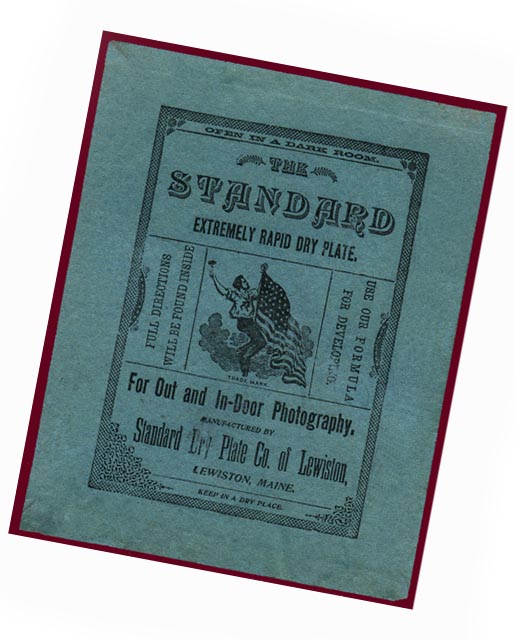 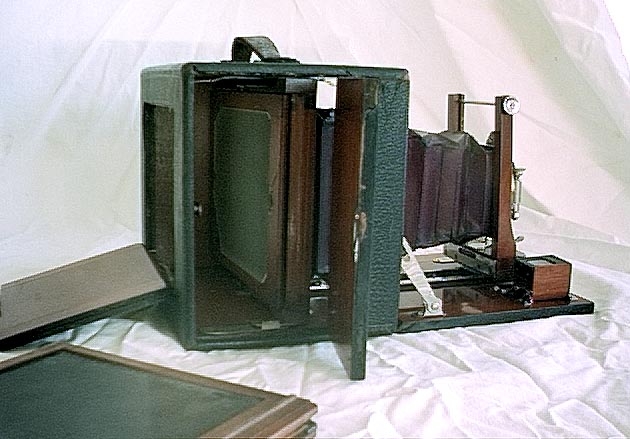